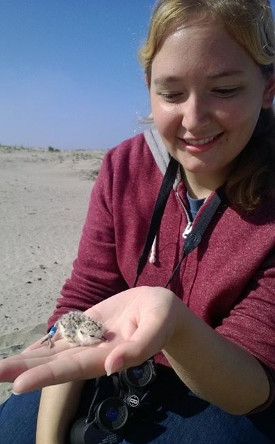 Each spring, dedicated volunteers and scientists like RCD Field Biologist Esther Haile help California State Parks protect western snowy plovers of Monterey County by walking beaches and counting nesting birds. The western snowy plover has been a protected species in California since 1993, when numbers dipped so low that it was put on the State’s threatened species list. Although its range spans from Washington to Baja, California, about 400 of the 2000 existing snowy plovers nest exclusively on Monterey County beaches including Fort Ord Dunes State Park, and Marina, Zmudowski, Moss Landing, Salinas River and Monterey State Beaches.  We are currently about halfway through the nesting season, which typically lasts from March to September.

The western snowy plover is threatened in part because they lay their eggs on the sand, which leaves them open to trampling by people or dogs and predation by ravens, skunks and other predators. Many of the plover chicks do not reach adulthood. Habitat loss has also been a huge contributor to plover decline. Despite the challenges, Esther finds the plover work to be extremely gratifying. She says, “Whenever a chick makes it, I feel so proud, like a grandmother.”

Because Monterey County is a vital part of the species’ long-term survival, it is not only important to track populations, but also to educate Monterey County’s public about how they can help protect this special ground nesting shore bird. Beach goers can help by staying out of marked nesting zones, keeping dogs on a leash (at beaches where pets are permitted), disposing of trash properly, and being aware that airborne items like kites and frisbees frighten plovers and may cause them to abandon their nests. If you are interested in reading more about the Western snowy plover, the State Parks Snowy Plover Protection page lists FAQs about plovers at https://www.parks.ca.gov/?page_id=22542. To read more in-depth information about the current condition of western snowy plover in Monterey County, you can read Point Blue Conservation Science’s Nesting of the Snowy Plover (Charadrius Nivosus) in the Monterey Bay Area, California in 2016 at https://www.fws.gov/arcata/es/birds/WSP/documents/siteReports/California/2016%20MontereyBaySNPL.pdf