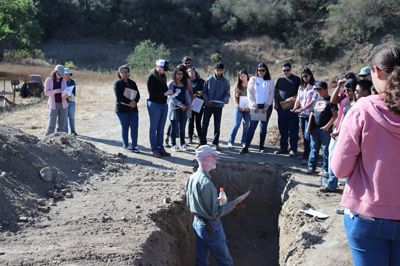 What initially began in 1942 with three Oklahoma conservationists brainstorming about how to get local youth interested in the field of soil science and management of soils, has since grown to be a nationwide program to engage students in deepening their soil science skills in a compelling, competitive context. Such contests challenge students to develop their ability to evaluate a site’s capacity for agricultural uses based on hands-on probing of the soil in a pre-dug pit, looking also at soil colors, textures, layers, depths and slope.

Each carefully-structured competition includes guidance and scoring by professional soil scientists. Such hands-on, contextual learning is uniquely valuable given the complex nature of soils and landscape, not to mention the opportunity to interact with professionals and exposure to related career opportunities. Land Judging contests are a collaboration between the Future Farmers of America (FFA), Resource Conservation Districts, agricultural education teachers and (in California) Cal Poly San Luis Obispo.

This year, RCDMC will host its 4th land judging contest in recent years on a Salinas Valley farm, as hosted by Rincon Farms and the Buena Vista Grange out amongst vegetable fields with the Gabilan Mountain Range to the east and the Sierra de Salinas to the west. Land judging contests have a long history in Monterey County, a tradition we are proud to carry forward. Prizes in Monterey County include scholarships to the California Natural Resources and Range Conservation Camp, a week-long summer camp at Elkus Ranch near Half Moon Bay. Winners also have the opportunity to advance to regional, state and national FFA-sponsored competitions.

A typical Land Judging contest is hosted at one or more farms or ranches where a set of 3-4 foot deep ‘pits’ representing distinct soil and landscape characteristics (row crop, orchard, and hilly rangeland, for example) have been dug and prepared to enable viewing and evaluation of the earth beneath the topsoil. Prior to the event, each pit is evaluated and its soil layers staked by a soil scientist from either RCDMC or USDA Natural Resources Conservation Service (NRCS) using a standard Land Judging contest form to provide a standard against which student-contestants’ efforts are later scored. In Monterey County, each contest begins with a brief review of soil science and land use principles and the contest-specific soil assessment methods and Land Judging score cards prior to actual competition. Ken Oster, an NRCS Soil Scientist who has been leading Land Judging contests for over 30 years, routinely advises the students to look around and pay attention to their surroundings. “Walk around the field and look at what’s happening. Look at how the land forms, elevation, and where the hills and river are located. Notice how the soil changes with the landscape. Kick the soil. This is something that anyone can do without tools.”

Each Land Judging pit site includes the toolkits students will need to conduct their land judging-- a water bottle, tape measure, slope finder and soil probes. Students are allowed 20 minutes to assess the characteristics of each pit and adjacent land surface, using individual score cards and provided toolkits. In addition to noting observed soil and land surface characteristics, students must also interpret them in relation to their effects on plant rooting depth, water penetration, water holding capacity, erosion and flooding. Taking all these factors into account, the student judging the land ultimately classifies it based on its land capability for agriculture and rates the land for other land uses like building sites or wildlife and recreation.

Past participants have confirmed the value of the contest in their own words. Kyla Monroe, who was high school senior from North Salinas High School when she won last year’s 2017 competition, appreciated the contest specifically because it was a hands-on experience. “We were allowed to go into the pit and touch the soil, work with it, and test it—and they (soil scientists) taught us how to do it.” Jacob Dixon, 2016 land judging contest winner from Watsonville, found that he not only learned about soil science, but also how to “describe soils and apply them to different land uses.” “By assessing soil,” he said, “We learned how to figure out the different uses for the land, for example—if an area is more suited to agriculture or if it is good for building houses, including those with septic tanks. Or if there was a river in the area before, then how that would affect the land.”

According to both Jacob and Kyla, students should jump on the opportunity to participate in the land judging contest because they also provide an opportunity to learn about the different career paths that are available for those interested in soil and agriculture. As Jacob put it, it’s an opportunity “to learn about careers that a lot of people don’t think about.” Kyla’s advice to students who might be on the fence thinking about participating, “Definitely do it; it is a great learning experience, even if you don’t know what you’re doing. It’s a great tool for anyone to have in their back pocket. You may even go to College for it.”